Under normal circumstances, the Photosub Annual Competition entries would have been projected at the club annual meal in March, the results announced and the trophies presented during the evening. However given the unique and unprecedented events of 2020, both the original meal date in March and the revised date in September were cancelled in line with government guidelines.

The print competition category which is judged on the evening based on members prints was removed as not being practical. A total of 132 images were submitted from 16 members.

Our honoured judge was JP Trenque, who is well known to many members as a past Chairperson of BSOUP and a previous Photosub Competition secretary. JP is an award winning underwater photographer, although has not been able to dive recently due to family and work commitments. However judging the images has rekindled JP’s urge to get wet again and hopefully we will see more of him and his images in the future.

The competition results are as follows accompanied by judges comments: 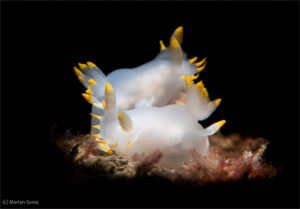 1st Place – Martyn Guess
That’s a bit saucy!  Beautiful clean shot of the mating nudis. Great light and composition. I chose it as my winner over the tompot blenny simply because I have a lot of tompot blenny images, but very few of mating nudibranchs in the UK. 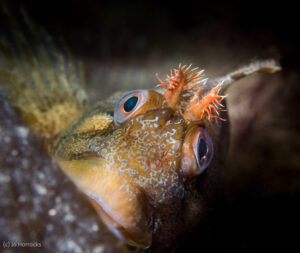 There were quite a few pictures of tompot blennies and it was difficult to choose my favourite one. The obvious reason I preferred this one is the eye contact. There is so much cheekiness in this picture. But it’s also an image where the foreground, although blurred adds to the image. And more importantly, the bokeh in the background. The softness on the caudal and pectoral fins make it a much stronger shot. This could easily have been the winner. 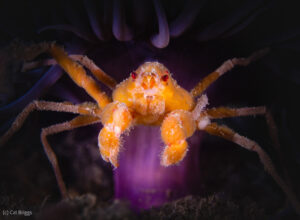 This crab is just so cute. And the anemone behind it shows that there can be a lot of colours in temperate waters. A little bit more light on the anemone would probably have made this image a runner-up. 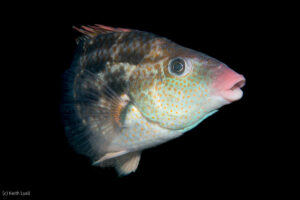 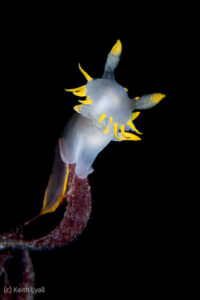 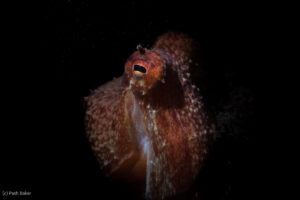 This octopus scores highly on the cuteness factor. It’s just a little bit too dark, unfortunately. 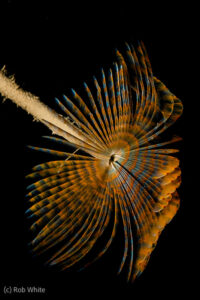 Nice clean shot and very colourful. I turned the picture around and thought the peacock worm would have looked better as a landscape 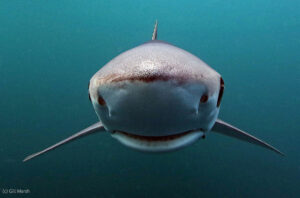 This is very Charliehoodesque ! Bang on the dome. I wouldn’t be surprised to hear Charlie had something to do with this! Cracking “in your face”, “nose on the dome” shot. With great interaction. 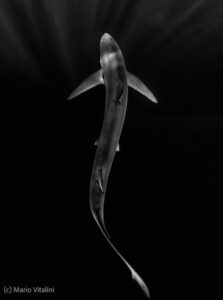 The fin movement gives this shark such an elegance. It’s a very arty shot and probably would have been my winner if the sun rays at the top had been a little bit more pronounced. 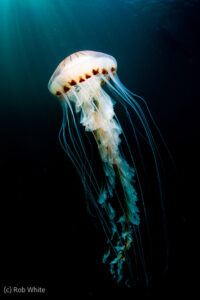 Beautiful lighting. I like the use of the diagonal, enhanced by the sun rays in the top left. In this image, I feel like I’m floating in midwater with the compass jellyfish 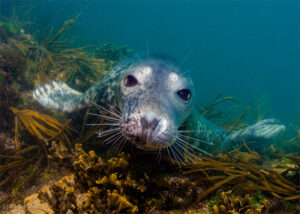 This pup just wants to play! It’s a great shot could easily have been in the top 3. 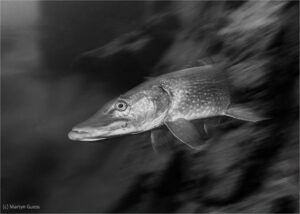 I like this pike. The movement is well captured. This could also easily have been one of my top 3. Why the use of monochrome? 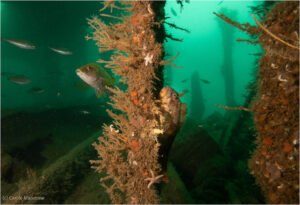 This shows what UK diving is mostly about. A good ol’ rusty wreck with plenty of life on it. A club diver’s dream. Great colour of the water and great lighting. I would have used the rule of thirds a bit more in this image, maybe cropping it a bit so that the pillar in the middle and the blenny aren’t so central. 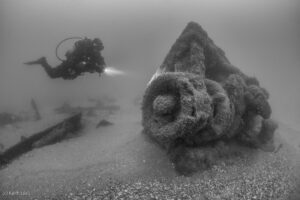 That’s a very interesting shot. I like the diver with the torch. I would have added a little bit of contrast to make the blacks blacker. 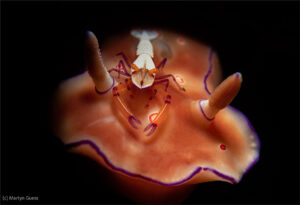 To me, that’s simply stunning. It’s one of the best images of commensal emperor shrimp and nudibranch I’ve seen and I would love to have an image like this one. It’s clean, simple and immediately tells a story about the symbiotic relationship. The shrimp’s eyes and elbows in the same plan as the nudi’s gills pack a lot of interesting features in the small focus window. 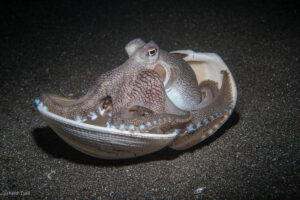 This scores 10/10 for cuteness! I remember years ago, I think it was at the Alternatives in Sharm, spending a long time at dusk watching an octopus gather shells around him and “lock-up” for the night. I found this fascinating.  Another day, still at the Alternatives with Linda Pitkin, we put our cameras down, watched and played with another octopus for ages. His curiosity won over his shyness and he interacted with us. It was one of those moments that stay with you forever. The strong composition and the very nice lighting make this a very strong image. Rather than being an octopus portrait, it tells a story. One can see the shells are used as a shelter but this tiny octopus seems very relaxed and peaceful. It’s almost as if it opens his door to the viewer. 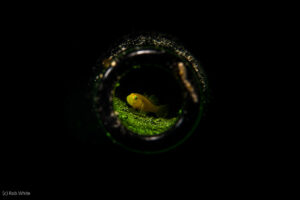 It’s probably obvious now, but I love an image that tells a story! And there is so much to talk about when I see a fish in a discarded bottle. Litter or second life? Although I should stay away from anthropomorphism, one could dwell on the fish’s expression. I love the lighting through the glass. I cropped the image slightly to see if bigger would work better but I think the dark background works very well as it is. The focus is spot on. It’s a cracking shot. 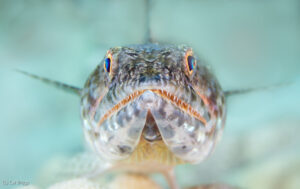 That’s a very nice portrait and I love the bokeh in this image. The colours are very pleasing, and the expression the lizard fish’s mouth makes it a strong image. 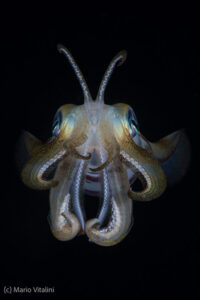 Another beautiful portrait. Great composition and nice eye contact. Pushing the exposure ever so slightly might have made it a more striking shot, but this is a photo I certainly would have loved to take. 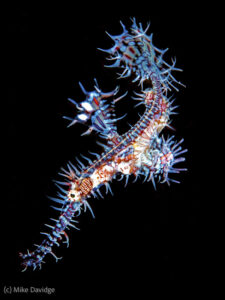 like this image because I’ve always struggled to get a picture of an ornate ghost pipefish without burning the highlights. It’s a very nice clean shot but I would just have liked to see more context around the animal rather than a close crop. 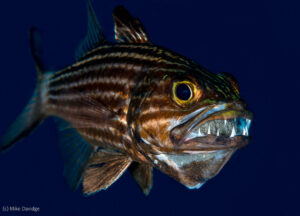 Cardinalfish with eggs are great subjects. I love the lighting on this image and the fact that the aperture was left just open enough so that the background isn’t completely black. As the caudal fin was slightly cropped, I think a tighter crop would have made the image more “in your face”. 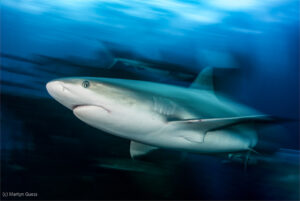 I love the movement in this picture. Is it all done in camera with slow shutter speed and rear curtain sync? The expression on the shark is great too. I try not to get too tempted by anthropomorphism but sometimes, it’s just too tempting! 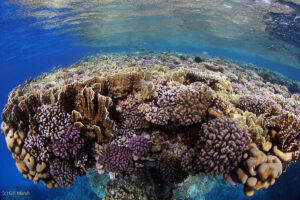 This image reminds me of why I’m missing diving so much. I used to love bobbing around on the surface or just below at the end of dives and take taking pictures of the top of the reef. That’s the kind of image that makes people want to protect the marine environment. It’s a very simple shot, full of colours and just makes you want to be there. I love it. 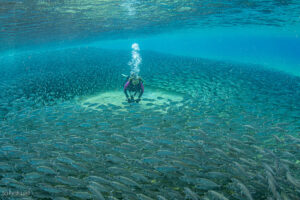 I had overlooked this image the first time I went through the slideshow because it didn’t have the striking colours that other pictures had. However, that’s another shot that makes me want to be there. I love schooling fish and they’ve given me good results in competitions in the past. I love the serenity of this image. It feels like I’m back on a trip to Sipadan or somewhere. We quite often try to avoid exhaled bubbles in our images, but here, I think they add to the image. 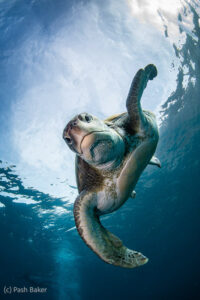 It’s a technically great shot of the turtle going through Snell’s window. The lighting is beautiful and the subject is very engaging. The only reason it didn’t end up in the top 3 is the diver and bubbles in the background which distracted me a bit from this otherwise beautiful image. 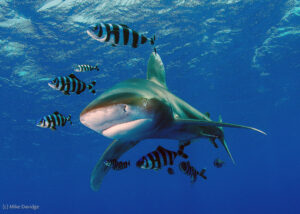 This oceanic white tip reminds me of a great image Len Deeley had taken, which had quite a lot of success in competitions. It’s a great classic portrait, which is beautifully lit. I marked it down slightly because I think it’s over-sharpened. I think a slightly softer image would have been stronger. 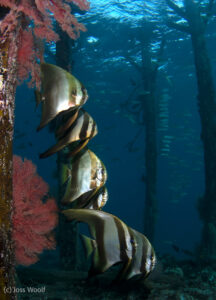 This is such an atmospheric shot. I like the light on the batfish. I tiny bit more light on the soft corals would have made it a lot more striking. 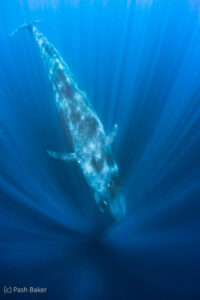 Whales are definitely on my bucket list! I like the composition and the effort to get the animal in the centre of the sun rays. I think his image would have benefitted from more contrast and maybe even being turned into a black and white monochrome.

Our thanks to JP Trenque for judging the competition, and for attending the virtual meeting to present his judging comments.

These events do not run successfully without the help of a number of club members. Thanks to Martyn Guess for managing the organisation of the albeit aborted evenings, Roger Eve for providing all event communication, Keith Lyall for organising and running the competition, and Martha for setting up and hosting the virtual meeting.